I have wanted Benefit Prrrowl for soooo long (at least over a year) but never purchased because I couldn’t justify the price for the reason that it felt sort of gimmicky.  I don’t know if this is the intention of the product but I know that the color blue helps whites look whiter…. So having blue glitter near your teeth or whites of the eyes should definitely keep them looking whiter and brighter.  And who doesn’t love that, right?
Recently Ulta had a beauty event that lasted a couple weeks and one of they days they had this marked down to right around $10!!  As soon as I got that email I marched right into Ulta and purchased it IMMEDIATELY!  I am so glad I did.
Here is the outside packaging… Loooove it! 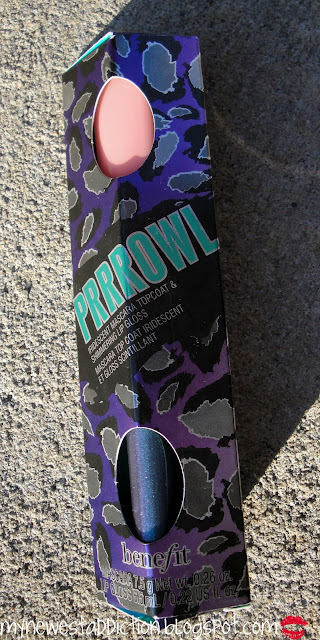 I enjoy packaging that looks interesting or unusual.  This dual sided product has a fun shape, as well!

The gloss smells great (fruity) and the doe foot applicator is actually quite large.  The gloss is a light pink with shimmery iridescent blue-purple glitter.  The shade is definitely lighter than my natural lip color so it gives a bit of a mod look but the shimmer in it keeps it fresh and modern.  It is iridescent blue glitter but it isn’t BAM in your face blue.  It is definitely interesting.
I put it on during my lunch break the other day and a girl I work with was INSTANTLY drawn to me and asked me what it was!  :)  That should tell you more than anything that I could write.
I would also like to mention that this lipgloss is decently pigmented and thick (so it does last a good amount of time) but it isn’t sticky.  It lasted on my lips for around 3 1/2-4 hours and after it had worn off the sparkle was still left making it appear that there was still product.  Another thing I would like to mention is that at time you can feel a decently chunky glitter feeling but it isn’t overwhelming. 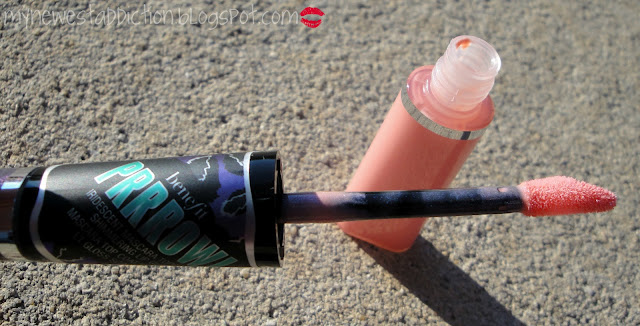 This is an attempt to swatch the lipgloss but it is soooo hard.  This is an intentionally out of focus picture because I feel like you can see the purple side of the iridescent glitter. 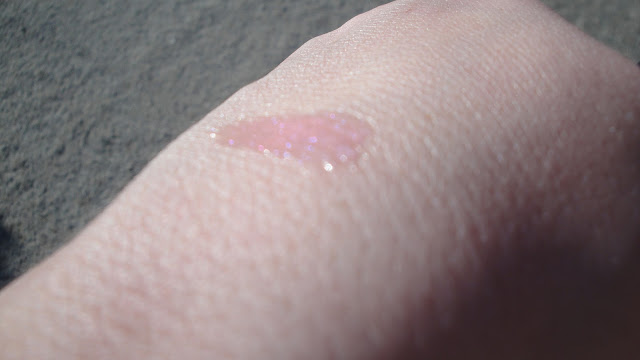 The other end of this tube is the peacock blue iridescent top-coat for mascara.  Obviously it is intended to apply OVER your regular mascara but you can also use it on bare lashes.
I realllllly like this half of it.  I have heard several people say that they didn’t feel as though the glitter showed up on their lashes but I find that it does show up on my lashes quite well.  It isn’t over-the-top but it is noticeable. 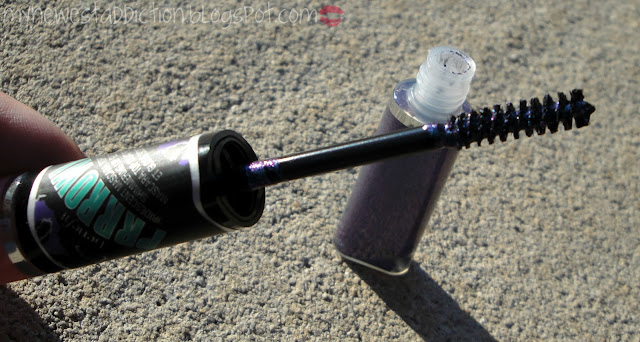 It is super hard to swatch the mascara and the gloss due to it’s multi-dimension.  Here is a GIF I made but I can’t for the life of me figure out how to get it to show up here other than linking it.  Sorry that I couldn’t make the image appear here.  If you know how to make this work, PLEASE let me know!!!
The next couple pictures are me attempting to FORCE the awesomeness to show up! HAHA 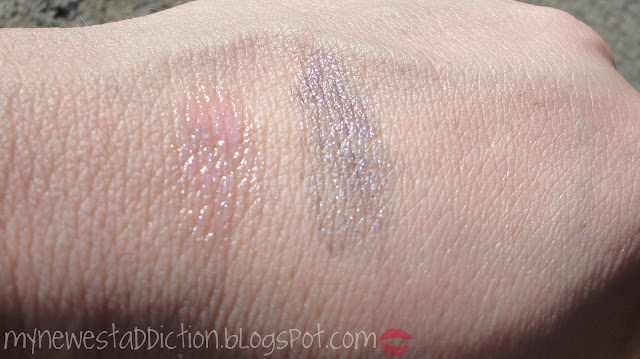 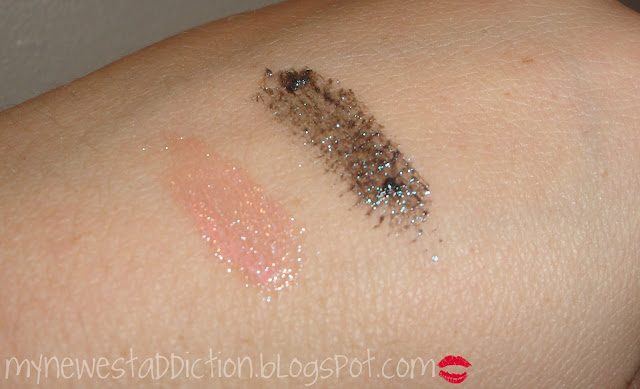 This is definitely a quirky, different type of product but I am proud to say that I own it.  I have been wanting it a while and I wish I would have just bit the bullet and bought it sooner than now.  Knowing what I know now, I could totally justify it at full price but ecstatic that I scored it for nearly 1/3 of it’s regular price.
My Newest Addiction Rating: ♥♥♥♥ (4 out of 5)
The only reason why this product isn’t getting a full 5 is because of the chunky feeling that the gloss gives.  Maybe it was impossible to have such a beautiful effect without having larger glitter particles in it,  but whatever the reason it just isn’t comfortable.  I know I said that it isn’t extremely overwhelming and I am willing to overlook it because it is definitely beautiful… but I have to be honest.  Other than that I think this was wonderfully creative!
xoxo,
Laura
Facebook ♥ Twitter ♥ YouTube